You might be saying to yourself exactly what my mom says (and I myself have said), "Why in the world would anyone ever make marshmallows from scratch???"  For me, it is for the same reason that I try many recipes - just to see if I can do it.  I was not interested in trying to make marshmallows until I saw this video posted on Facebook by America's Test Kitchen.  You need to know - America's Test Kitchen is one of my favorites.  I DVR the show on PBS, I read the blog, and I own several cookbooks.  The recipes aren't always the easiest, healthiest, or fastest to make but they are ALWAYS the very best version of whatever recipe it is.

So, I saw this video and decided it would be fun to make some peppermint marshmallows to share with family and friends for Christmas presents, and, guess what? America's Test Kitchen succeeded again - and with a recipe that is actually pretty easy and fast as well.  The only special equipment you need for this recipe is (are??) a candy thermometer and a stand mixer.  You could use a hand mixer, but it would be a nightmare.  These turned out great, and I was happy to share them!  This recipe is only published in one of their books that I don't own, so I wrote out my own recipe from the video.  If you want to make these marshmallows, watch the video first.  It helps. Also, always read through a recipe before starting.  I will point out again that this is not my recipe.  It is only what I put down from watching the video.

Directions:
Line a 9x14 baking pan with a foil sling (A sling is two pieces of foil laid across each other in a + shape and pressed down into the pan. You want the foil to be long enough to come up and over the sides of the pan.). Spray with cooking spray.

Bloom gelatin in 1/2 cup water in the bowl of a stand mixer (that just means to pour the gelatin on top of the water). Let it sit for 15 minutes.

While the gelatin blooms (sounds lovely, but it is kind of stinky...), combine 1/2 cup water, corn syrup, sugar and salt in a saucepan.  Pour the sugar slowly into the center of the saucepan.  You want to avoid getting sugar on the sides of the pan as it will crystalize and ruin everything.  If you do get sugar on the side of the pan, brush the side of the pan with a pastry brush dipped in water. Don't stir.  Bring the mixture to a boil over medium high heat (on my gas stove that's a 4).  Swirl the pan periodically if you feel like the mixture needs to be combined more.  Boil for 6-8 minutes until the syrup reads 240 degrees on a candy thermometer.

Use the whisk attachment on your stand mixer on low to break up the gelatin.  Slowly pour in the sugar syrup, being careful not to let the syrup hit the side of the bowl or the whisk. (You just don't want to boiling syrup to splatter on you.)

Gradually increase the speed of the mixer to high.  Whisk for 10-12 minutes until the outside of the bowl feels barely warm.  Add vanilla or other extract.  (If you want to add color, now is the time.  For pink peppermint, I added 5 drops red food coloring.)

While the mixer is running, mix together the corn starch and powdered sugar.

Spray a rubber spatuala with cooking spray and use it to spread the marshmallow mixture into the pan quickly after it is finished mixing.  The cooler it gets, the stickier it gets.  Don't worry about scraping the bowl.  Smooth the top and set aside.

Sift 2 tablespoons of the corn starch/powdered sugar mixture (cs/ps m from this point on - much easier to type) on top of the marshmallow mixture.  Cover and let set overnight.

Sift 2 more tablespoons of the cs/ps m onto a cutting board.  Spray a knife with cooking spray (are you catching that this stuff is sticky!!).  Dump the marshmallow on top of the cutting board.  Cut into 1 inch strips.  Cut the strips into 1 inch cubes.  If the knife starts sticking, spray it again.  Roll the cubes in the remaining cs/ps m.  Toss in a strainer over the sink to remove extra cs/ps m.  Store in a plastic bag.

These are GREAT in hot chocolate!  Let me know if you try them out :) 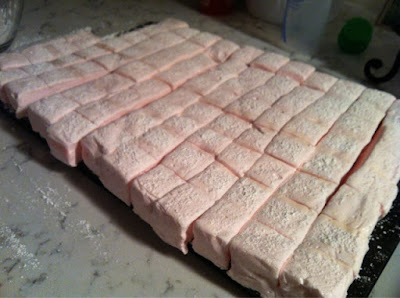 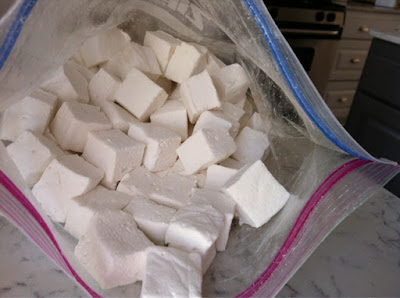