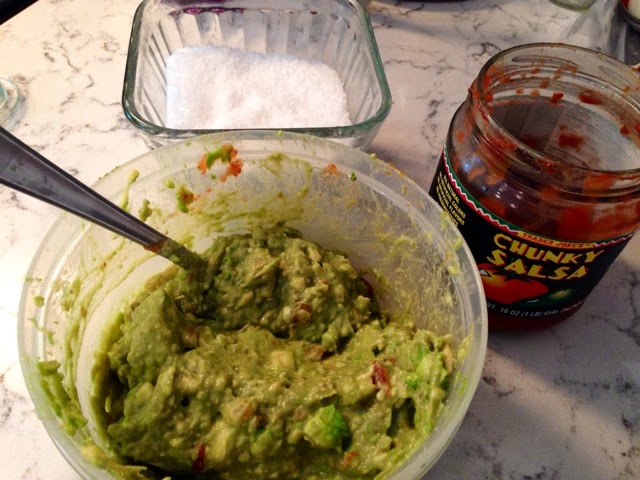 Seriously. I'm sure this existed already, but I just thought about a super easy guacamole cheat that turned out perfectly.
3 ingredients (maybe 4):
4 small avocados
2 large spoonfuls (soup spoon) of chunky salsa - as spicy as you like (not the soupy  stuff)
1/2 teaspoon kosher salt
(Lemon or lime juice - I didn't have either or I would have used a squeeze for color and brightness of flavor)
Mash it all together. That's it, folks! Obviously the stuff with all freshly chopped ingredients is better, but this came pretty darn close. Make it!
Pin It Now!
Posted by AK at 2:05 PM No comments:

Email ThisBlogThis!Share to TwitterShare to FacebookShare to Pinterest
Labels: Easy

Easy Dinner for a Busy Night

As a member of the Influenster team, I was recently given the opportunity to try Annie's Homegrown Frozen Entrees.  We have been fans of Annie's for a while and were excited to try one of the family-sized frozen entree options.  I picked up the Lasagna with Meat Sauce at Target (this was specifically where I had to use the coupon, but I also have not seen it at any of other local grocery stores.  Let me know if you find it elsewhere!).

This lasagna is GOOD.  My husband loves frozen lasagna, but I generally find the preservatives upset my stomach, and I don't even want to guess what the meat is.  Annie's is a brand I trust, and they have proven themselves with this lasagna.  Every ingredient on the list was something I would have in my pantry or refrigerator, except the last - xanthan gum, used for thickening.  Considering what I find on most frozen meal ingredient lists, I'll take that. 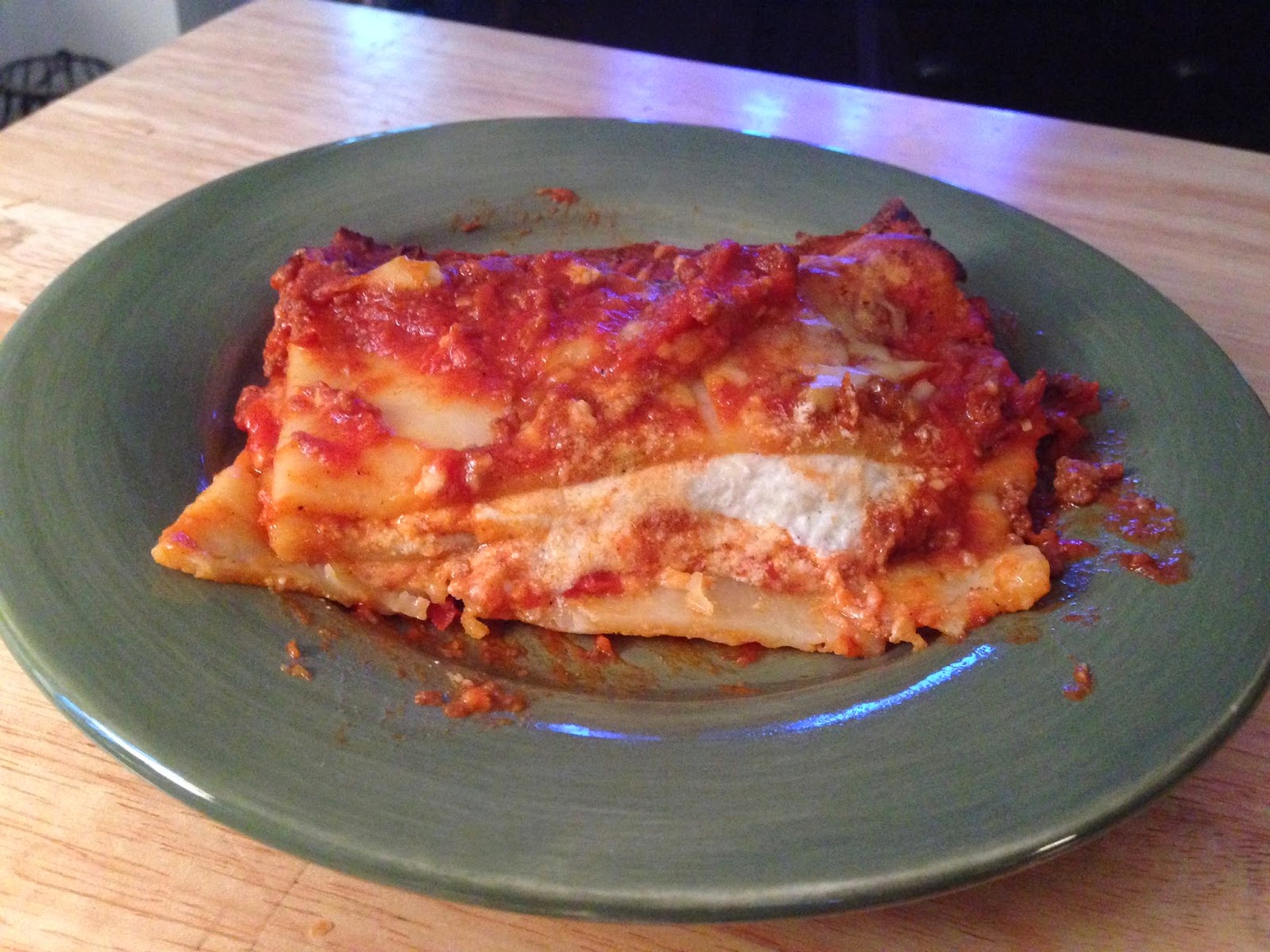 The lasagna was rich with just the right amount of meat and cheese.  I count points and did not mind using the 10 necessary for a good sized slice of lasagna. Even my husband gave a hearty thumbs-up.  The package makes three average-sized servings or two large servings - perfect for our small family.

Annie's Homegrown Lasagna with Meat Sauce Meal will now be a staple in my freezer, and I can't wait to try the other frozen meal offerings!

I was going to wait to post about our celebratory meal for the opening of the Olympics in Sochi, but I found that there aren't many Russian-themed menus up for watching parties. So, I thought I would throw out what we will be having and see if anyone else has fun ideas for Russian food. There will only be three of us at our party (I know - we're wild), so the menu isn't extensive.

As it stands right now, our menu looks like this:
Borscht (see below for recipe)
Beef Stroganoff
Biskvit Raspberry Roulade (Roulette) Cake – Рулет

We will start with a steaming bowl of borscht - don't knock it til you've tried it.  I have a great recipe that is based on one given to me by my Ukrainian friend, Yulia, and one I found on The Fig Tree blog (also the source of the photo below, which I will replace once I have made mine). 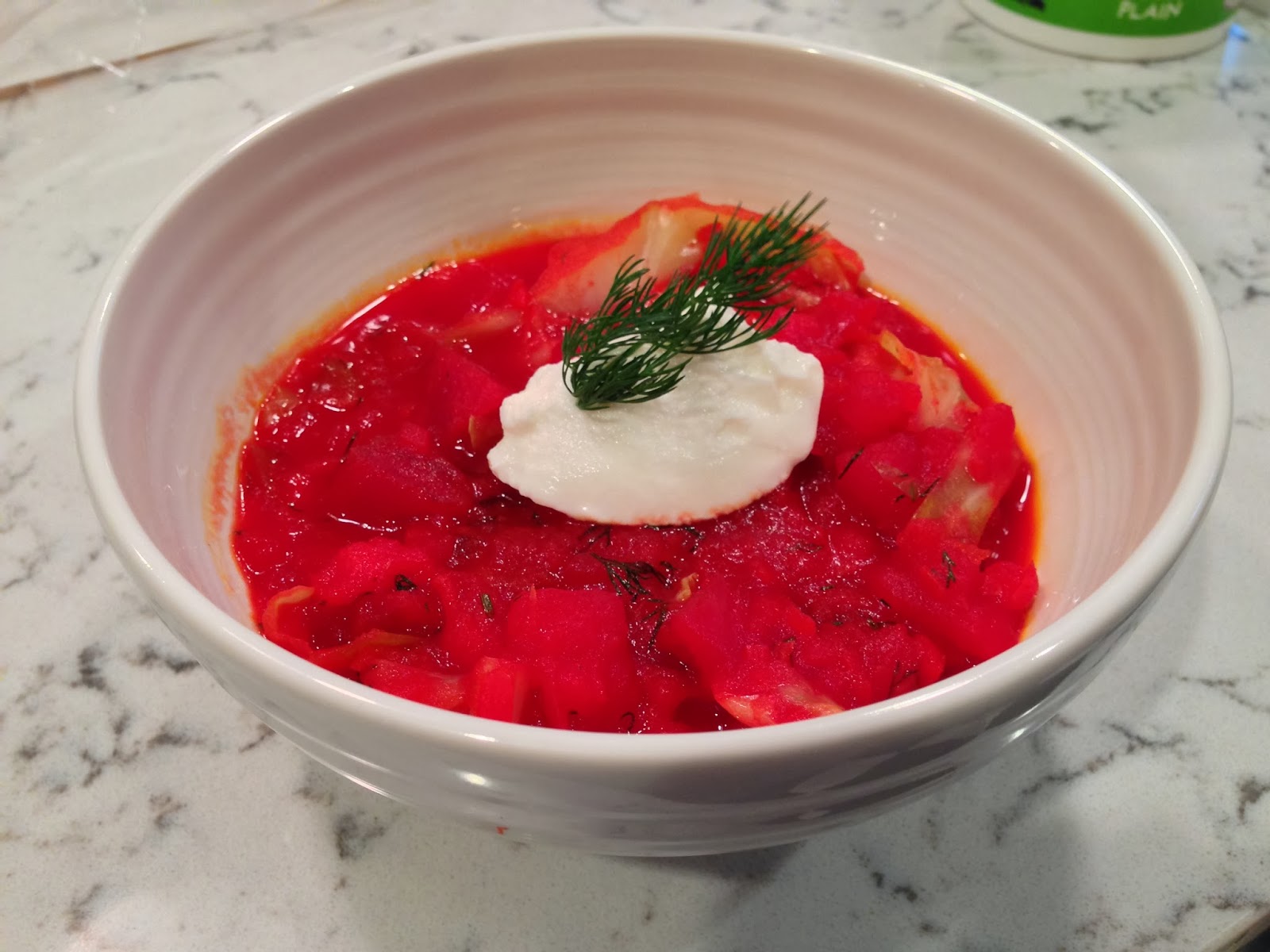 Ingredients:
1 large or 2 small beets, peeled and cut in half or quarters

Preheat oven to 375 degrees. Place beets in a roasting pan. Drizzle with 2 teaspoons of oil and a sprinkle of salt and pepper. Toss to distribute the oil well. Roast the beets, turning once or twice during roasting, for 40 minutes (or until a thin-bladed knife pierces a piece of beet with little resistance). When the roasted beets are cool enough to handle, chop them as finely as possible.

Put the remaining tablespoon of oil in a large pot and heat over medium-high heat. Add the diced onion and tomato paste. Cook until the onions are soft, about 3 minutes. Turn down heat to medium-low and continue cooking the onions until golden and very tender, 10 to 15 minutes.

Add the beets, carrots, potatoes and bell pepper along with the dill stems (tied together in a bundle with kitchen twine or put them in your Pampered Chef Herb Infuser) and broth. Turn the heat back up to medium-high and bring the soup to a boil. Reduce heat to medium-low, add shredded cabbage, cover and cook, stirring occasionally, until the soup is well colored and beets are starting to melt away, about 10 minutes.

Remove the dill stems from the soup. Add the red wine vinegar and season with salt and pepper. Chop the dill fronds and sprinkle them into the borscht reserving some for garnish.

Serve with a dollop of sour cream and garnish with dill.
Pin It Now!
Posted by AK at 5:30 PM No comments:

Now that my baby girl is over a year old, I decided it was time to fit back in the pre-pregnancy clothes. SO, back to Weight Watchers I go.  Fortunately, I received an Influenster VoxBox with a free box of Skinny Cow Peanut Butter Creme Divine Filled Chocolates, and those things are really tasty! 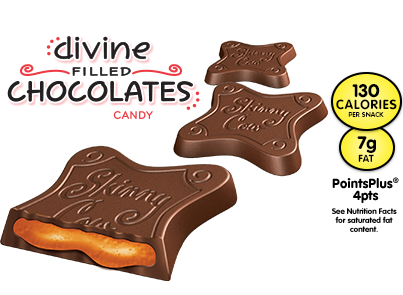 These come three to a package and are 1 point each, or 4 points for all three.  I tend to shy away from diet food because of all the wacky ingredients, but I was pretty pleased with this ingredient list.  I keep these at work with me so I can have one or two squares in the afternoon for a reasonable snack that also satisfies my sweet tooth.

If you are looking for a nice afternoon pick-me-up, check these out!
Pin It Now!
Posted by AK at 6:00 PM No comments: