A winter favorite for my family has long been LaMadeleine's Tomato Basil Soup.  If you have had this soup, you know what I'm talking about.  If you haven't, you have two options: visit your local LaMadeleine if you live in Texas or a handful of other southern states OR make your own. This recipes was printed in the Fort Worth Star-Telegram in 1994.  I made a big batch a few years ago for the family at Thanksgiving, and it was a hit. 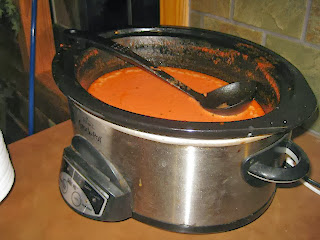 Directions
Combine tomatoes, juice/and or stock in saucepan.
Simmer 30 minutes.
Puree, along with the basil leaves, in small batches, in blender, food processor (or better yet, one of those handy hand-held food blenders, right in the cooking pan). Return to saucepan and add cream and butter, while stirring, over low heat. Garnish with basil leaves and serve with your favorite bread.
Pin It Now!
Posted by AK at 5:30 PM No comments:

OK, I know that a BUNCH of you just decided this post was not remotely interesting to you.  But, I also know that I have friends out there who hunt, or whose husband hunts, or whose father-in-law's cousin hunts and you have deer meat in your freezer just waiting for inspiration.  (Interesting factoid I learned recently: The term 'venison,' though commonly used for deer meat, actually refers to all game meat.)

I can't say we always get it right, but I do have a few tips for cooking with venison.  I can tell you right now - if you don't like the taste of deer meat, you can just move on.  Nothing to see here.  These recipes aren't made to mask the taste of game, though some do take the edge off.

First, we use ground venison for anything we would use ground beef for.  I love it because it is usually free (coming from my husband, father-in-law, or brother-in-law), and you are basically getting free range, all-natural meat.  We use it in spaghetti, tacos, sloppy joes...the list goes on.  One thing to note, though, is that if you are making hamburgers with venison you will want to mix it with something fattier like ground pork or beef.  Otherwise your burgers will turn out a bit dry and crumbly.

Next, if you have a say in how your venison source gets their meat processed, make requests.  My father-in-law sometimes has it made into ground sausage.  We make patties for breakfast that are especially tasty, and healthier too.  I haven't tried it, but I can imagine it would make a good sausage gravy for biscuits and gravy.  Again, use it wherever you use ground sausage.  You can get sausage links and jerky.  Don't be afraid to ask!

Finally, I need to address backstrap.  Honestly, I'm scared of it. It is a good piece of meat but I rarely fail to overcook it!  I know people who swear by slicing, battering, and chicken frying it.  That must be tasty, but I don't like to fry any more than I have to.  I have found two ways to prepare backstrap that I love and want to share.  First, is to cook it in a slow cooker.  I don't have a specific recipe that I use every time - just Google "slow cooker venison" and look for a recipe that has 4 1/2 to 5 stars.  Also, you can use a recipe that calls for venison roast. If it calls for a 2 pound roast, put in 2 pounds of backstrap.  My favorite backstrap recipe, though, is adapted from one by the British chef, Jamie Oliver.

Mushroom and Venison Stroganoff for Two

Directions
Cook the rice or noodles according to the package instructions.

Season the meat with salt, pepper and the paprika and rub in. Place the frying pan back on a high heat and pour in the rest of the olive oil. Add the mushrooms and fry for a few minutes until they start to brown. Then add the meat and fry for a minute or 2 before adding the parsley stalks (you can do this in 2 pans or in batches if your pan is not big enough) and the cooked onion and garlic. Toss and add the butter.

After a couple of minutes of simmering, stir in the lemon zest and all but 1 tablespoon of the sour cream and season, to taste. Continue simmering for a few minutes. Do not cook the meat for too long! This is the death of backstrap. It should still be pretty pink in the middle. (Don’t worry – it won’t hurt you.)

Serve over rice or noodles. Top with the remaining sour cream and the parsley leaves.

(This recipe is adapted from the recipe found in JAMIE AT HOME by Jamie Oliver. Copyright (c) 2008. Published in the U.S. by Hyperion. All Rights Reserved. www.jamieoliver.com)
Pin It Now!
Posted by AK at 5:30 PM No comments: